It was a call for help from a parent I once helped with parent coaching, about eight years earlier and 1000 miles away in another state. As she explained how I had helped her immensely in raising her two little girls, who were aged 6 and 8 at the time, it didn’t take long to refresh my memory as to how we had crossed paths at one of my earliest parent lectures. Admitting she incorporated most of my advice, she revealed that she was calling for desperate help with one particular issue that she regretted not heeding advice in my teaching - no cell phones or online social networking tools for children.


What Was Once Cute and Innocent
This desperate mom explained how she allowed her girls to have cell phones at an early age, pressured by the influence of “everyone else was letting their kids have phones, so what was the big deal.” She went on to tell me that it was cute in the beginning when they were little, texting a few of their little friends and getting so excited, sharing information about their latest favorite boy band or outfit they bought. She also liked the fact that she could contact them anytime and anywhere. But things began to change as the girls matured. They grew more secretive about whom they were communicating with and they didn’t always answer the phone as quickly as they once did when she called to check on them. And whenever the mom would ask to see the phone, or ask who they were texting, the girls grew more defensive and a casual question began to erupt onto rages that generated screams such as, “You don’t trust me,” or, “I have a life too ya know!” As the girls became teens, the rages grew so intense that it just became easier for the woman to leave the girls alone and avoid checking up on their cell phone use.

By the end of the call, the woman was in tears and admitted that her now almost 15 year old had been sending inappropriate images to a boy and was setting up a rendezvous outside of the house after the parents had gone to bed. She said to me, “Taking the phones and Internet away is going to be too difficult, so what else do you suggest I do?”

This final statement by this mother is one I have heard many times from parents seeking me out for help. Their child’s protective and defensive responses in outbursts of anger have taught the parents to back off and not interfere with the child’s unsupervised access to social media tools such as cell phones, email, and Facebook accounts. The parents then find it easier to hope and pray their children will be safe, rather than to take a stand and undo what they started when it was cute and innocent many years earlier. Two astounding statistics came from a survey conducted recently by the online privacy company TRUSTe; that 84% of parents polled actually believe that their children are responsible with private information and 42% of teens polled admitted they will accept Facebook friend requests from people they don’t know.

Do Cell Phones Really Keep Children Safe?
Some parents take the position that they want to be able to contact their children at any time, especially if their child rides a city bus to and from school, or if the parent is ever trapped in a traffic jam or stuck at work. If your child can be found in situations regularly without you or not under the immediate care of an adult, than perhaps a cell phone may be necessary. For these situations, many carriers are now offering devices with parental controls that offer safety and limited use on the device. These features are a good option if the parent is convinced that the child must have a cell phone. It is also important to know that smart children are breaking the security and figuring out how to access the controlled features, or they are getting older and techno-savvy children to do it for them. The bottom line is that setting up a device with parental controls may have good intentions, but it becomes one more thing the parent has to keep track of and control. Feeling overwhelmed with things to remember and police, some end up giving up and removing the limitations just to make life easier for themselves, but dangerous for their children.

Many parents are going to agree with my point of view and have already taken the tough approach to saying no and limiting their child’s access to social networking tools. Others are going to read this column who have been bitten by the “halo effect” bug in parenting, saying things like, “My child is different, I know she wouldn’t do anything I wouldn’t want her to do.” Some will voice their objections to what I’ve written here by sending emails or letters to this publication or directly to me, and we will both welcome the feedback as a chance for dialogue. To these adults, however, I urge them to consider the effects of the onset of normal changes in their children, like hormones, risk-taking, and curiosity. Consider how these changes will affect the dynamics of what was once cute and innocent when combined with tools intended for adults. 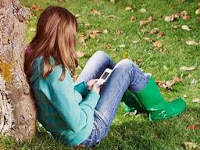 I could have written this piece solely based on research results and statistics. Instead, I wrote it using evidence I continue to see in my experience working with parents. A few weeks ago, I met a mom whose child is a friend of my 12-year-old stepdaughter and who knows many of the other mutual friends of our kids. She revealed to me how she received a friend request from a child who is one of those mutual friends, and accepted the Facebook friend request simply to help keep an eye on her. Not long after becoming online friends, she cautioned this little girl about her language and behavior on Facebook, after reading inappropriate posts. Unfortunately, we both know this little girl’s mother is not online herself and falls in the 84% of naïve parents!

One day my stepdaughter’s friend shared a shocking fact with me; that a classmate of theirs told them she couldn’t live without the next episode of Jersey Shore! This girl is twelve years old! Liberally thinking parents may be saying, “They are going to see it somewhere, so why be so uptight about it?” Allowing children, tweens, and young teens to watch reality shows like the Kardashians and The Bad Girls, have a cell phone, and use Facebook, may make them popular parents today, but what are they setting their children and themselves up for when their kids mature?

Want a copy of this article as a handout to print and share?  CLICK HERE to get it.