How to Get Kids to Clean Their Rooms

February 28, 2012
There is a great article running on Yahoo titled, "The 7 Messiest Kids Rooms Ever!" that feature seven photos of really messy rooms.  My favorite is here to the right with the one titled WHERE'S WALDO.  Somewhere in that photo among the chaos is a sleeping child. 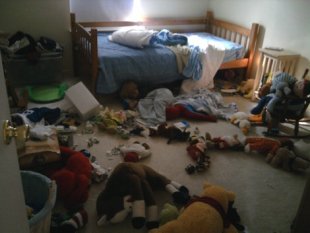 My wife and I don’t have the time to watch much TV, but one program running on NBC that caught our eye last year is the television show PARENTHOOD.  I’m bringing this up because there are many scenes that represent classic parenting situations; some handled well and some not so well.  I remember one scene involving the youngest son Crosby, played by Dax Shepard and his 6-year-old son Jabbar, well played by Tyree Brown.  Jabbar began to act overwhelmed and helpless when his father asked him to clean up his room.  Crosby then moved the request up a few notches, to demands and threats, but to no avail.  A little while later, the boy’s mother arrived home and discovered that Crosby ended up cleaning Jabbar’s room for him and a fight between the parents erupted; a realistic incident that can happen in many families.


Win a $10,000 Home Makeover - FREE March Madness Bracket Contest! (aff)
Defining the Problem
I believe there are three primary causes of the messy room; children and teens lack organizational skills, they are enjoying exerting power over their own space, or they are purposely keeping their room a mess as a way of getting even with an over controlling or unengaged parent or caretaker.  I have outlined some tips for parents on what to do about each of these issues, but we must first examine why this becomes a battle ground between parents and children.


Safe Beginnings for Everything to Babyproof your home (aff)
Many parents are in a struggle over the messy room because they know how important it is to allow a child or teen to have their personal space, yet they feel the space is being abused by keeping it untidy.  Other adults come from a position of fear that their child or teen will grow up to be a slob if they don’t get them to become more organized with their room or possessions now.  And then there are other parents and caregivers who see the child’s messy room as just another form of not complying with the adults.  Some adults are drawn back to the feelings they had as a child when they were forced to clean their room or punished for not keeping it clean.  When they see their child’s unkempt room, it conjures up these bad feelings and then think to themselves, “My parents wouldn’t have allowed me to get away with a having a messy room.”
Forcing a Child Doesn’t Work Today
While force may have been a normal parenting approach in autocratic times, it doesn’t work today.  Forcing a child to keep his or her room clean might get you what you want, but it will also destroy your relationship with your child or teen.  It might seem like it’s working, but there is a good chance your child will find a way to sabotage the relationship in other ways as a means for revenge against the force you use in your parenting.  Below are four tips that don’t include the use of force.


Kids Bedding and Room Decor at oBedding.com (aff)
Teach Them While They’re Young
Give young children small tasks to do to help keep their room picked up.  Telling a child to go clean her room is like saying to her, “Go explore space.”  Like in the television show example above, it can easily overwhelm and frustrate them.  The success they experience with small and repetitive tasks can motivate them to want to do more and also creates a foundation of good feelings around keeping their room clean.  These will still be with them when they become teens and can influence how well they keep their room picked up then.  Toys can create chaos so things work best if they are kept in a playroom separate from the child’s bedroom.  This may not be possible for everyone, so at least consider separating toys into two categories; chaos and supervised.  Chaos toys are the large, easy-to-pick up items that are usually kept in a toy box.  A daily routine can be established for picking up these toys before dinner or bed.  Supervised toys are the sets or kits that include lots of small pieces, such as building and play sets.  These should be kept out of a child’s reach so they can ask for permission to play with them with the parent’s approval.  It is also very helpful to establish rules for playing with these types of toys, such as where they will be played with and when they will be picked up and put back in the container.


Fun Rooms For Kids. Easy kids room make-overs. Wall decals, murals, wall art, bedding, pillows and accessories.
www.FunRoomsForKids.com (aff)
Set Up Rules About What Can Go Into a Bedroom
When it comes to messy rooms, some parents are appropriately concerned about the safety and wellbeing of their child, such as used dinner ware, dirty laundry, or uneaten food amidst the papers, books, clothing, and toys on the floor of the child’s room.  If a parent establishes rules about what is and is not acceptable for the child to bring into his room, then this eliminates a huge portion of the concern.  Announce a set of rules that food, dishes and such are no longer allowed in the bedroom.  You can also declare that friends will be allowed in the room (or even just over to play) when the room is picked up.  Turn over the responsibility of doing laundry to older children by providing instructions on using the laundry machines.  Set up rules that expensive electronic devices with access to the Internet are no longer allowed in the child’s bedroom without supervision, such as iPods, tablets, Kindles, and laptop computers.


Get Cubby Storage, Coat Lockers and Shelves here! (aff)
Conclusion
If you have used some of these suggestions and more, and still your child’s room is a mess, remember that your child’s room belongs to your child.  Pick your battles because some are more important than others.  You also want to ask yourself, “Is it more important for me to have clean rooms in my house or a strong relationship with my child?”  When we get to where we’re going at the end of this life and we find ourselves facing the greater power that created the magic of life, do you think he’ll really say to us, “Nice job, you made sure that your child’s room was clean all the time.”
Bill Corbett is the author of the award winning book series “Love, Limits, & Lessons: A Parent’s Guide to Raising Cooperative Kids” in English and in Spanish, and the founder and president of Cooperative Kids.  He has three grown children, three step children, two grandchildren, and lives with his wife Elizabeth and step daughter Olivia.  You can visit his Web site http://www.CooperativeKids.com for further information and parenting advice.