Handling an Ungrateful and Complaining Child

The child comes home after a sleep over and her mother has this fantasy that her daughter is going to come running in, wrap her arms around her mom and say, “I’m so happy to see you mom, I missed you. Let’s spend some quality time together.”

But instead of the scene she imagined, her daughter declares that she’s bored and begins complaining about all the things she doesn’t have that her friend has. Mom does her best to ignore it until the thoughts of how ungrateful her child is and memories of all the money and time she’s spent on her becomes too much.

What happens next is the last thing she wanted to have happen, but it does. Mom yells and her daughter yells back. Before too long, the day is wrecked, she sends her daughter to her room and their relationship is strained. And this all transpired because she gave her daughter permission to sleep over a friend’s house for the first time in a long time.

So let’s give mom some skills for her to practice and some knowledge that might help for the next time this happens, because it will. To start with, it’s important for mom to know that her children will usually behave the worst in her presence. That means whatever thoughts or feelings the child may have will most likely come out in front of and directed toward mom.

In the scenario above, the little girl was probably disappointed that the sleep over had ended and she wasn’t happy about it. And because ‘misery loves company’ she began thinking other unhappy thoughts to join those, such as her jealousy for all the wonderful things her friend had that she didn’t have. So as she returned home, all these negative feelings came flowing out in the presence of the person she feels safest with to express them… mom!

Is it OK for the little girl to hurl all these feelings of disappointment at her mother? Some might say it 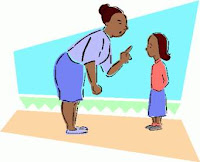 isn’t and that the mother has every right to punish her daughter and shut it down. Our own parents or grandparents would have stopped that behavior immediately. But I say we should allow our kids to rant to an extent before taking action because we want our children to develop the ability to express how they feel.

When your children begin complaining about their boredom or the things they don’t have, just know that they feel comfortable doing that in front of you. Then, agree with them that it is a problem by acknowledging their feelings. In response, simply say, “I know.” You don’t have to agree with them and you should not get defensive and take their unhappiness personally. If after saying “I know” sincerely and often enough, it doesn’t seem to be dying down, the next step is to remove yourself from the scene, if you can.

Some parents like to remove the child, but I don’t agree with that approach. In response to them being moved to their room or a timeout space, they often become angrier, ready to fight more when they come out of the room. But when the parent removes them self, it allows the child to reflect on their own words and actions and see the situation differently.
#billcorbett #cooperation #cooperativekids bill corbett boredom children cooperative kids kids love limits lessons parenting parents ungrateful kid