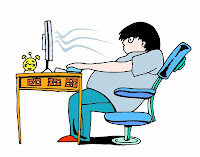 Her question to me was, what should she tell her son about what he saw and his inappropriate surfing that most likely pulled in the virus. I told her that it was a good time to have a male family member have ”the talk” with him, even though she wanted to wait until he was ten. I also told her that she should have a few words with him, calmly, about rules for surfing the Web and how viruses can cause problems on the computer. The bottom line though, was that it was not his fault for surfing the Web and there should have been measures in place to keep him safe.

I asked her a question, “if she had left a loaded gun on the kitchen table and her son was home alone, would she have yelled at or punished him if he used the gun to shoot out the windows?” We are responsible for our children and cannot fault them if they do something that was driven by their curiosity or exploration. I advised this mother that children should NOT be left unattended on the Internet. This access should be supervised and limited. There are many affordable programs out there (see Software 4 Parents) that parents can purchase to monitor the use of the computer and Internet, and others that filter out the inappropriate Web sites.

She went on to advise me that she allows her son to play an interactive Web-based game that enables him to play with and communicate with other boys. I asked her to consider the fact that some of those “other boys” could be pedophiles masquerading as children, and for her to look for other ways for him to have fun and be creative.

Our children are curious little explorers. Because of this, we must take the necessary measures to keep them safe, monitor where they go and take notice of what they do! Get more help on setting boundaries and limits at www.StopTheTantrums.com.