Putting Your Kids on a Leash to Handle Your Fear 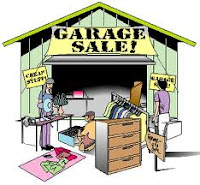 Recently, my wife and I held a yard sale to clean out the basement.  Throughout the day, I watched with interest, all the parents who brought their children along.  Most of them constantly snapped at their kids to leave things alone and not to touch.  I must have heard the command, “Don’t Touch,” too many times to count.  The adults walked along slowly, deep in thought as they examined all the items on the tables and the contents of the boxes.  Then, every minute or so, they would look up to see where their child was and bark at him to put down what he had in his hands.  Some children looked at the parent, dropped the item, and then just went to another box to pick something else up.  Other children just ignored the parent and continued to play with the object until the parent rushed over to her and demanded she drop the item.  That child would then cry, increasing the parent’s anguish.

I Brake for Yard Sales: and Flea Markets, Thrift Shops, Auctions, and the Occasional Dumpster

One young mother who came to our sale had the cutest little toddler ever.  The little girl was not quite 2 years old and so tiny.  She was so curious about all the items in the boxes, while her mother seemed oblivious to her pulling things out of the boxes and onto the ground.  I gave her a little basket and she had fun filling it with odd items as she walked along, mumbling in her toddler gibberish.  Every so often, she would begin walking toward the boxes that were closer to the road and when her mother realized it, the mother almost screamed to “Get back here!”  The fear of her daughter running into the road triggered her actions and words.  The unfortunate thing was, when the mother yelled, I could see the fear flair up in the little girl’s face and she did not understand.  I knew the toddler wasn’t walking to go out into the road, but to her mother, she seemed to be going in that direction.  The unfortunate part of this incident is that the little girl was unable to connect the closeness of the road, the potential danger, and the mother’s worry about her safety.  All she knew was that every few minutes, mommy would yell and become scary.  The mother was unconsciously injecting fear in her little girl.  It might be worth mentioning leashes for kids here.  Many adults reject the idea of having a child on a leash because it resembles treating a child like a dog.  But if it will keep a child from moving toward dangerous situations so that the adult can concentrate on something, then I say, “Why not?”  See the link below for an example of this type of device.
2 - in - 1 Harness Buddy - Monkey

I wanted to help the mother understand what was happening, but I didn’t think she would have been open to this type of information at the moment.  After all, she didn’t know who I was, what I do for work, or that I was even observing what was going on.  So instead, I asked mom if I could hold her and she agreed, feeling a sense of relief that she could look around and shop.  I picked the little girl up in my arms and took her to the fence to watch our greyhounds playing in the backyard.  It was easy to redirect the little girl’s attention and keep her distracted with the dogs.  Other than dealing with the odor from the little girl needing to be changed, I had fun playing with her.  I felt useful that I was temporarily stopping the mother from unconsciously frightening the toddler with her own fear.  What things might you be doing that could be frightening your children without your awareness?  Watch my TV show at http://www.TheParentingShow.tv.